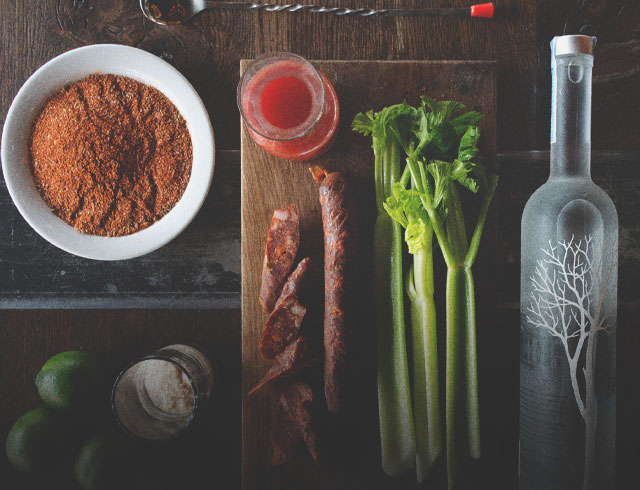 Calgary is the birthplace of the Caesar and these local restaurants pay homage by taking the classic drink to the next level.

It doesn’t sound like a particularly obvious combination — who would have thought that a combination of vodka, clam-spiked tomato juice and spices, garnished with a celery stick and a celery salt rim would become a symbol of Canada’s national identity? In 2019, the Caesar, a drink invented right here in Calgary, marks its 50th anniversary and its popularity only seems to be growing. 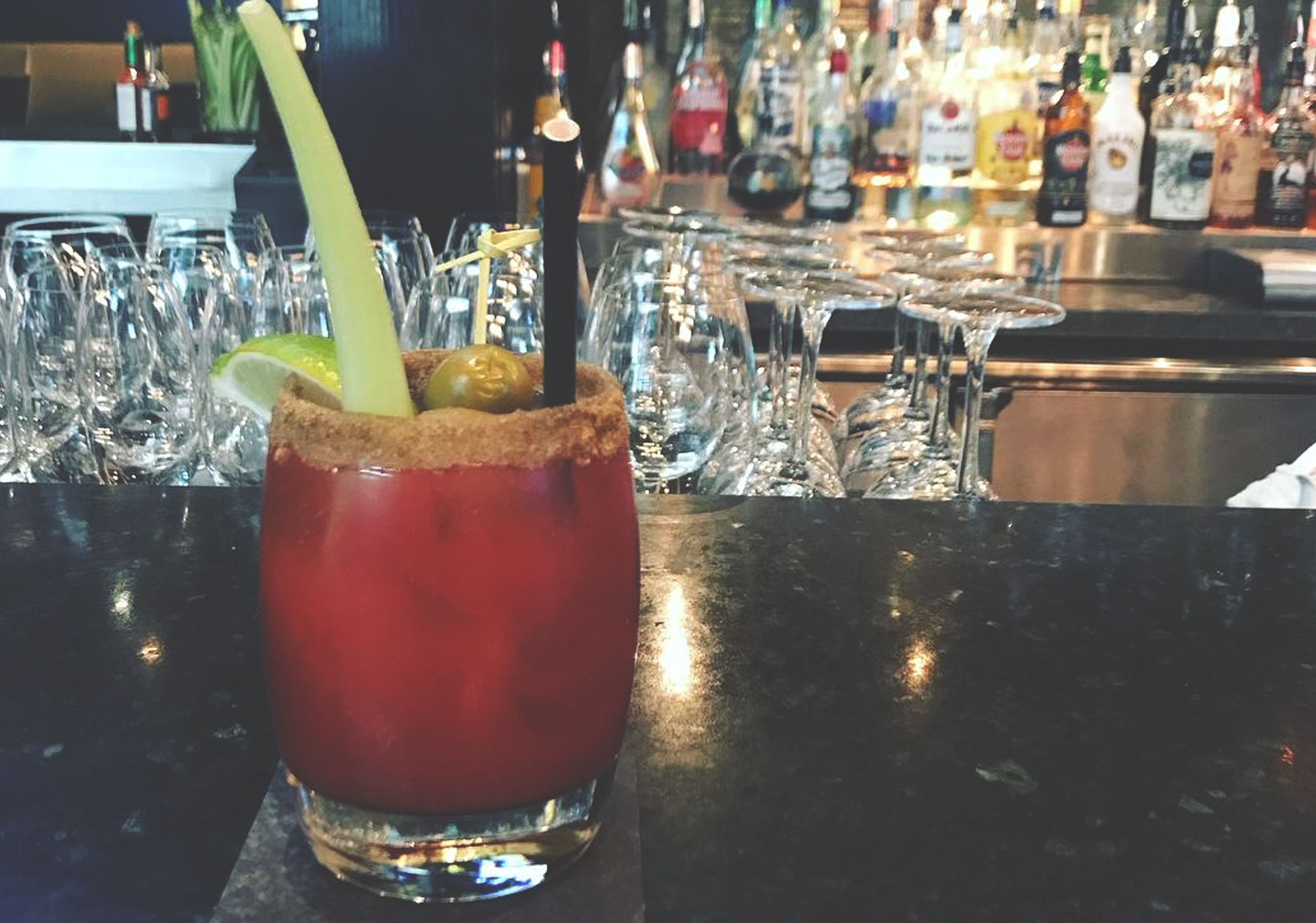 Get the Original Caesar at the Westin

The Caesar was not, contrary to popular belief, invented at Calgary’s Caesar’s Steakhouse, though that iconic restaurant continues to serve a very nice version of the now-classic cocktail. Rather, in 1969, Walter Chell, the food and beverage manager at the Calgary Inn (now The Westin) concocted the very first Caesar. It was a play on the Bloody Mary, made all the more savoury with the addition of Mott’s Clamato in place of standard tomato juice.

What inspired Chell to create this spicy and surprisingly nourishing clam-flavoured beverage? Some say that he wanted to celebrate the opening of the hotel’s new Italian restaurant with a drink that mimicked his favourite pasta dish, Spaghetti Vongole; others claim that he was trying to win a contest being held by Mott’s. Either way, Chell’s stroke of genius wasn’t the first Clamato-based cocktail on the market, but it is the one that stuck and became a Canadian brunch-time standard. In fact, the Caesar is such a favourite across the county that Parliament declared it Canada’s Official Cocktail in 2009.

Liquid Lounge at The Westin still serves a very classic (though, slightly updated) version of the Caesar and if you’re a true Caesar fanatic it’s more than worth popping in to pay homage to its birthplace.

Below are some top spots to hit if you’re planning your very own Caesar crawl once you’ve tried the original and its birthplace. 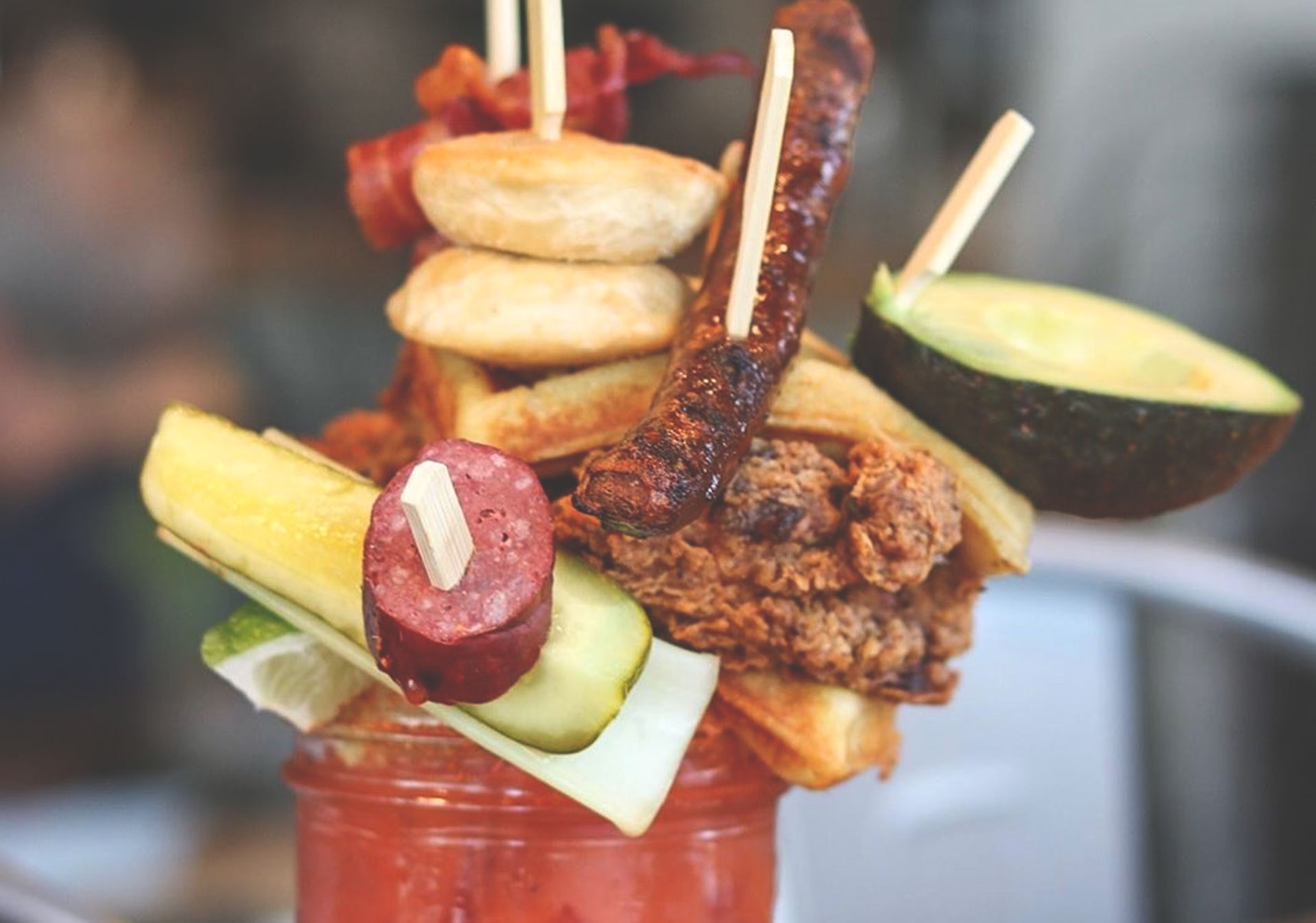 Pick your garnish with the Weekend Brunch Caesar at The Beltliner (Photo credit: @thebeltliner on Instagram).

Weekend Brunch Caesar at The Beltliner

There are Caesars and there are meals that come with a side of boozy spiced Clamato juice. Falling into the latter category, The Beltliner’s weekend brunch Caesar bar lets you garnish your Caesar with a range of truly ridiculous skewered snacks like chicken and waffles, smoked meat, chocolate cake, perogies, small breakfast sandwiches and old-school items like pickles and bacon.
Supress from menu
No

This Calgary owned-and-operated distillery also features a restaurant that does indeed serve brunch, which requires a killer Caesar. Burwood Distillery’s Caesar is made with two ounces of the distillery’s signature vodka, plus house-made Worcestershire, house-made hot sauce and house-made pickled carrot and bean. They don’t make their clam juice mixture in-house, but they do step things up with high-end Walters Craft Caesar mix.
Supress from menu
No

Cleaver has built its reputation on fun and whimsical fare, but the restaurant’s Caesar may be its crowning glory. The Caesar Stack is so out-of-control with garnishes, it isn’t even on the restaurant’s cocktail menu — it’s listed as a “main” on the brunch menu. The drink itself acts as a vehicle for fried chicken with a jalapeno waffle, a jalapeno corn dog, a beef slider, bacon and pepperoncini.
Supress from menu
No

Another Asian-inspired take on a Caesar, the FC Caesar at Foreign Concept uses the classic Caesar recipe as more of a loose guide than a sacred instruction manual. It’s made with Ketel One vodka and uses kimchi juice in place of the traditional Clamato. The restaurant garnishes it with a togarashi (Japanese chili spice mix) rim and house-made pickles.
Supress from menu
No

The Guild Caesar at The Guild

As a Canadiana-inspired restaurant, the staff at The Guild know that they need to have an above-average Caesar. They deliver the goods by infusing their exclusive Sub Rosa vodka with dill and mixing it with premium Walter Caesar mix, then garnishing with bacon and an array of house-made pickles.
Supress from menu
No

One of the best places in Calgary to go for cocktails, Klein/Harris has a “True North” section of its drinks menu that is wholly focused on hand-crafted Canadiana cocktails which naturally includes a Caesar, albeit with a K/H twist. The restaurant makes its own clam and celery broth (sorry, Mott’s) and gives guests the choice of enhancing it with either vodka or gin from the local Eau Claire Distillery.
Supress from menu
No 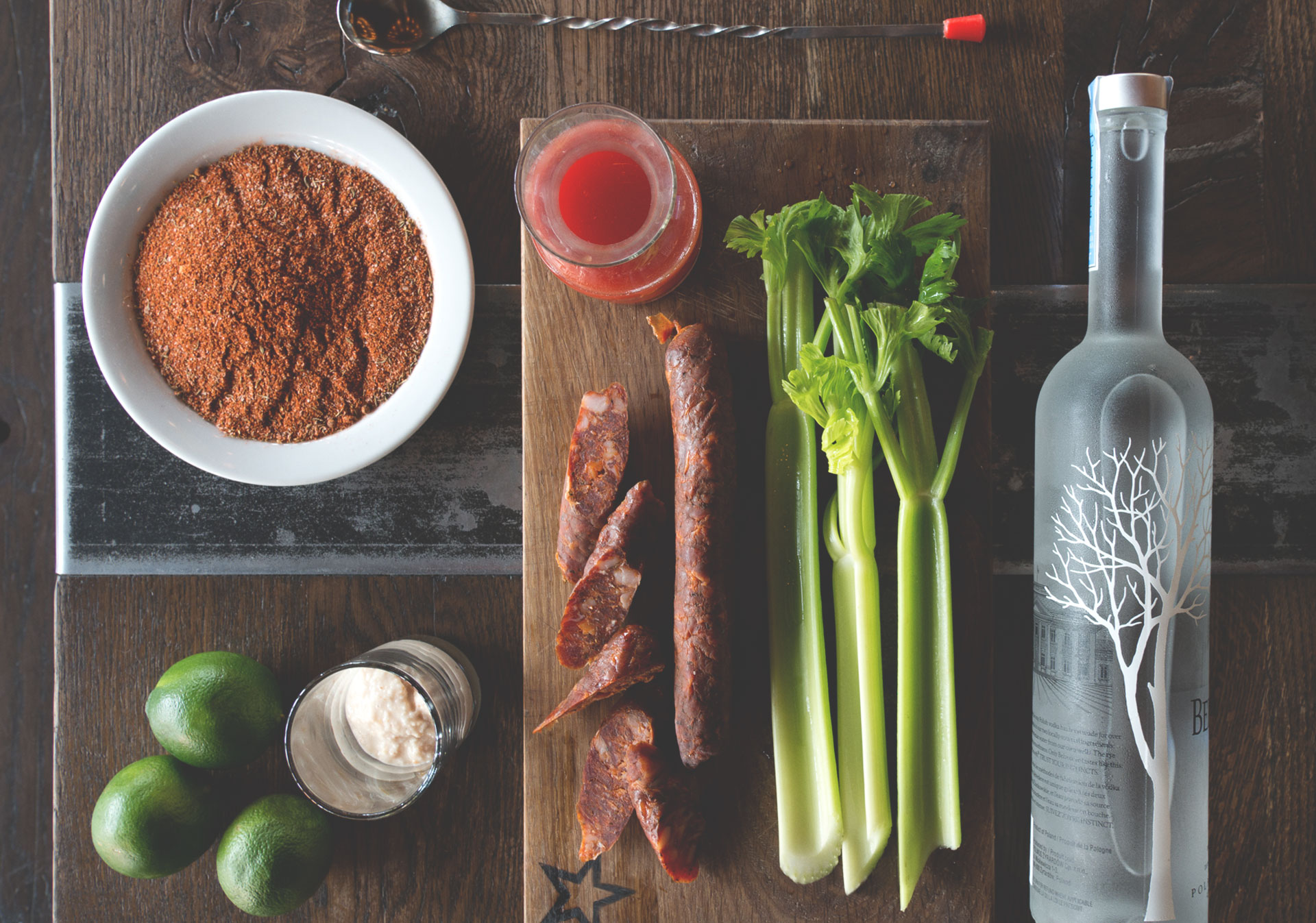 All the ingredients needed for a NTNL Caesar.

The four National locations are best known for their beer, but they also do a fine Caesar. The NTNL Caesar is made with vodka, Clamato, a bland of spices and horseradish and garnished with house-made pepperoni and a pickle spear. Oh, and because National is still a beer hall, there’s a splash of IPA thrown in for good measure.
Supress from menu
No 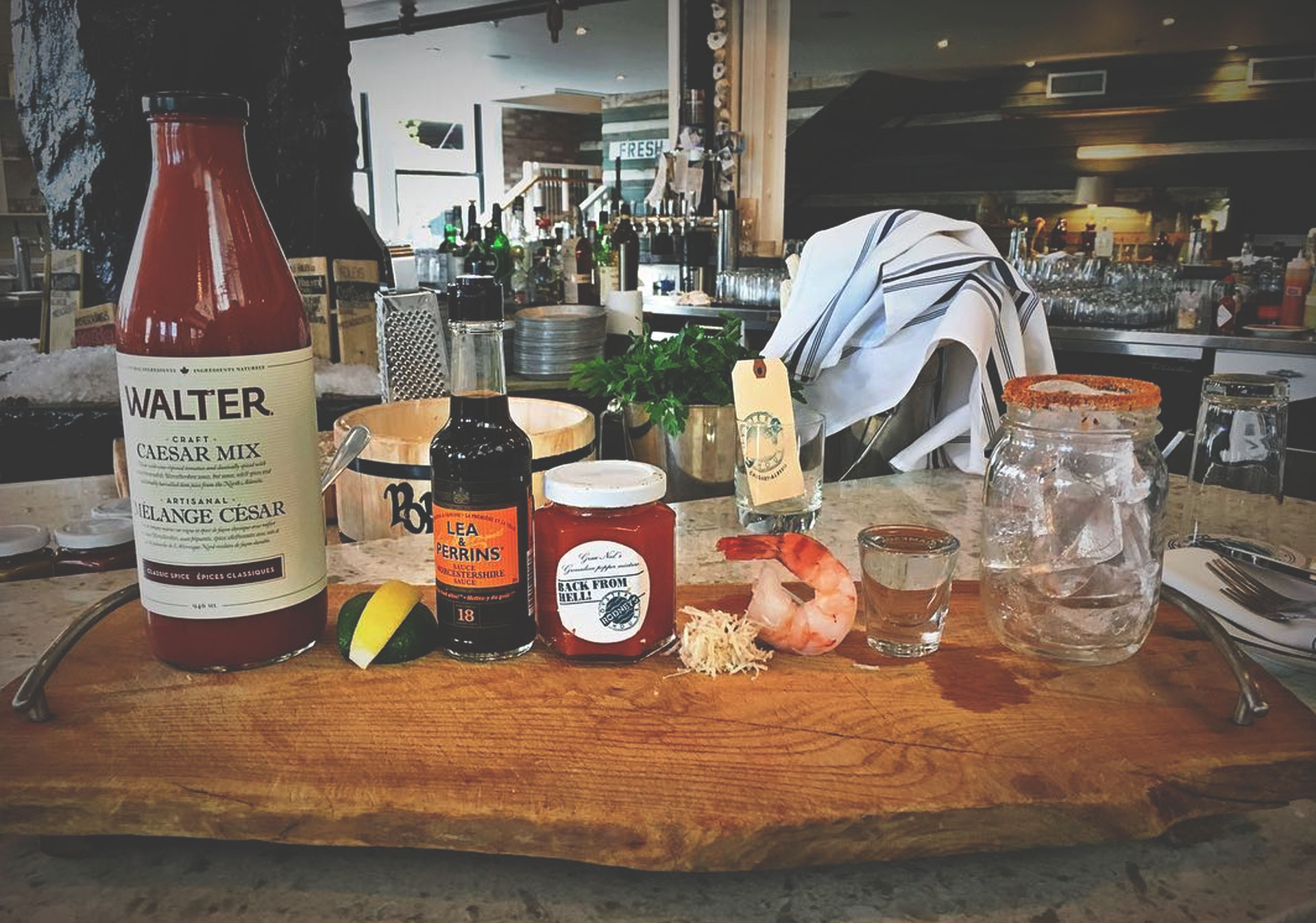 Rodney’s Classic Caesar is spiked with horseradish and garnished with shrimp (Photo credit: @rodneyscalgary on Instagram)

A cocktail made with clam broth practically begs for a seafood garnish — unsurprisingly, the bar at Rodney’s Oyster House is happy to pile it on. Rodney’s Classic Caesar is spiked with horseradish and garnished with a juicy shrimp.

If these spots aren’t in your plans, the vast majority of restaurants and bars in Calgary have a bottle of Clamato stashed behind the bar and will happily whip up a Caesar any time of day. Be sure to ask for it extra spicy and don’t forget to eat your garnish!

The Calgary History of the Caesar, Canada’s Drink 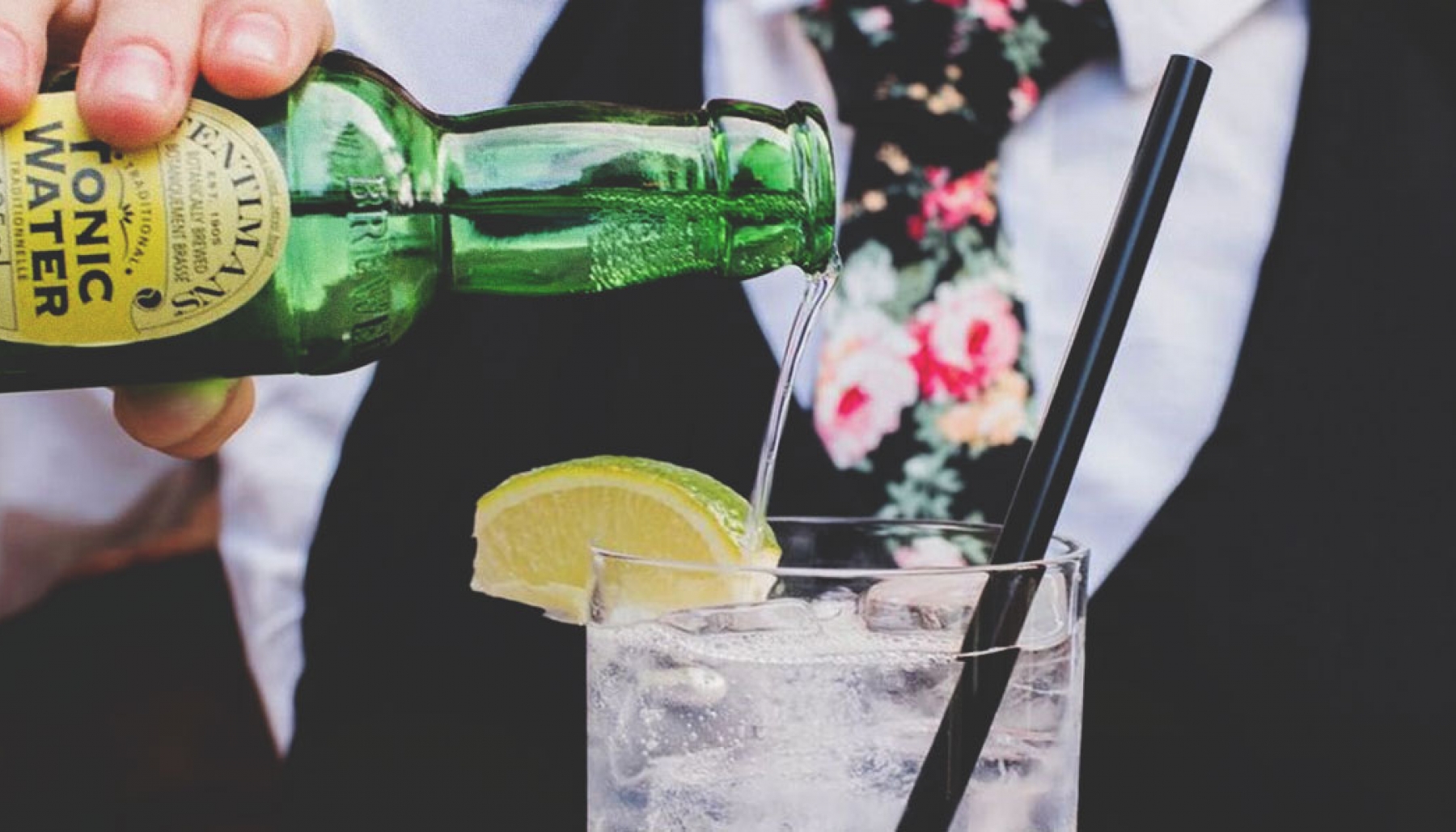 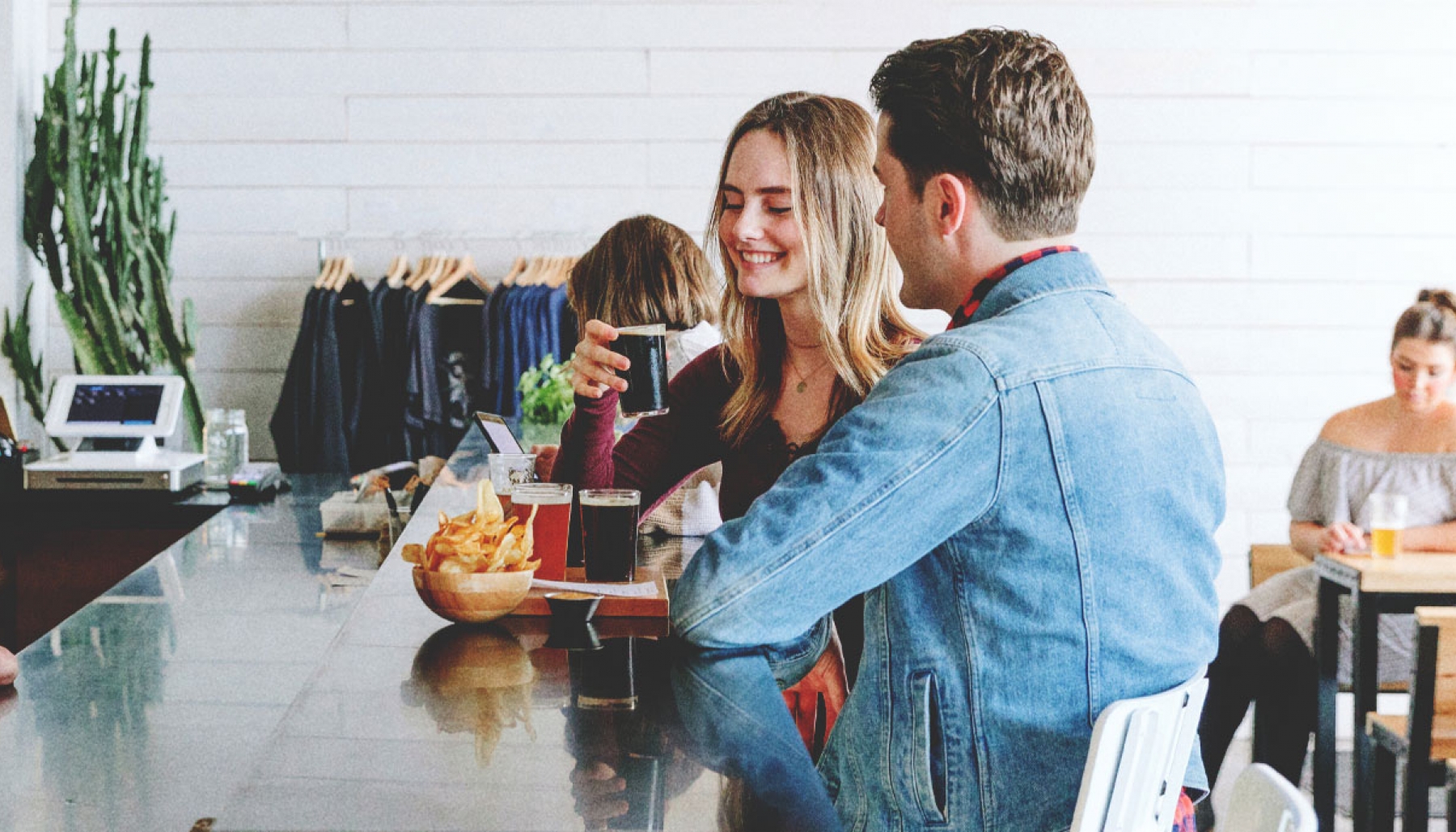 Thirsty? Use this itinerary to build your own brewery tour